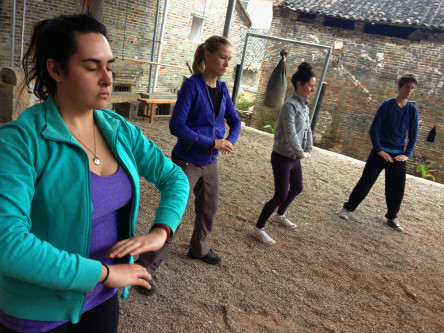 I have been staying at Omeida Chinese Academy for six weeks trying to learn Mandarin and of course the topic of learning qigong and tai chi comes up in conversation now and then. Many of the students are interested but know little about it. One classmate for example told me she wanted to learn kungfu as though she had done Taiji with a friend it was really slow and she was interested in learning a martial art. Others talked about how they wanted to learn to relax as when they go back to their stressful jobs they find it hard to unwind. All of them showed an interest in learning more about the culture in China and I, as someone with a little history in Yangshuo and someone who as learnt a little taiji, seemed to be able to offer the occasional words of explanation.

In the end I managed to persuade a small group of students to try an introduction lesson at The Traditional Tai Chi School after I had taken one of them there for a look at the place. I think she was amazed at the traditional buildings, the atmosphere and the character of the school. So once word went around about how nice it was they booked a lesson and I came along just for the fun of it.

When we got there M aster Kim was training a small group of long term students and so we all got to see some more advanced practice including kicks and punches which I think helped put our own lesson in some kind of context. So often I find beginners have no idea that Taiji is a martial art and they can not imagine how it could be used in combat. I explained to them how the form we learn just teaches us to move in different ways, how we learn to connect to internal energy and master our physical bodies to enable us to fight, should we desire to. In fact I doubt I could ever fight using Taiji and it’s not the reason I do it. None the less it is an important aspect of the art.

So we started our lesson and Master Kim gave a us a little talk about what we were going to do and led us into a short standing meditation, zhàn zhuāng (站樁), literally “standing like a post“. I actually thought this was a  little hardcore as standing meditation requires to to stand holding your arms out in  in front of you for extended periods of time (I think we did about five minutes in all).  Actually everyone managed it and afterwards seemed to have enjoyed the experience. Standing is a great way to learn to relax because you are forced to confront the tensions in your body and it also gives your body the opportunity to make its own alignments and readjustments. reath, connect the movements with our breath and quieten our minds. This is perhaps the hardest thing to do and something I still find challenging. It’s also a very important part of Taiji practice and I remember reading somewhere of a Master saying that practising Taiji without meditation and Qigong is like baking a cake without turning on the gas. Also I think this was the part that most of the group really wanted to learn about and so everyone was very attentive.

Master Kim is a really good teacher, so patient and encouraging. He must have been through this class a million times with other people but you wouldn’t have known it. He guided us all through each step like a kindly uncle. His experience as a teacher really shows and he knows just how deep to go with the lesson. Whenever he came to offer adjustments and corrections to me I could really feel the sensitivity to my personal skill level and needs.

So we then moved onto learn some form and I was very impressed that we managed to get quite so far into the first section of the the Old Frame First Routine (Lao Jia Yi Lu – 老架一路) which includes a total of 74 moves. We made it through to Six Sealing and Four Closing (Liu Feng Si Bi – 六封四闭) which is a fairly recognisable move within Chen style Taiji Quan. We went through it step by step with Master Kim alternately correcting and leading us through the movements. I have been through those opening steps myself hundreds of times but even so still find new elements to learn in the sequence and I expect I will continue to do someone after another ten thousand times.

Before we completed the sequence Master Kim took the opportunity to demonstrate some applications. I stepped up at first and he showed how to redirec

t the energy from an incoming punch. He also showed us how to use the opening movements to shake off an attack. All very useful and simple self defence moves that anyone can use even after one brief lesson. But also an important insight into the nature of Taiji. It also helps us know where to direct the feeling in the moves and where to hold our arms and legs as we go through the movements.

For me and the other students this was a brief but wonderful afternoon discovering something about Chinese traditional culture in a beautiful and atmospheric setting. One day I hope to have the time and money to study at the school long term but for now I need to focus on learning to speak Chinese so it’s back to class for me and my tóngxué (同学).

Author :  Roy Hanney – is a university lecturer living and working in Hangzhou, Zhejiang Province, China. He practices taiji, qigong and yoga with a particular passion for Chen Style Taijiquan. In his spare time he makes films, authors websites and makes video art. He blogs about his encounters with Qigong and Daoist healing arts at his website:- http://www.qigonginchina.com