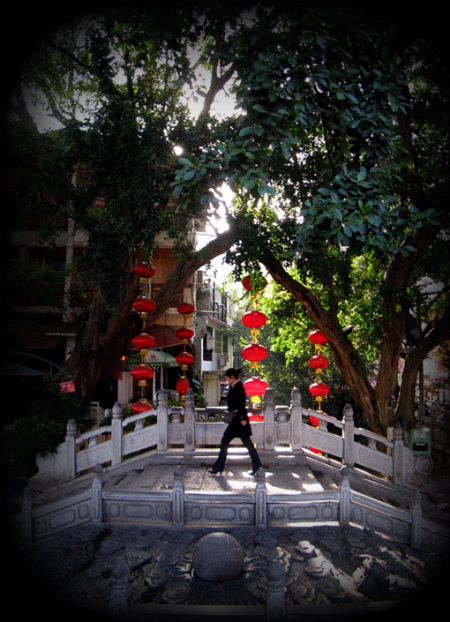 Yangshuo is not a typical Chinese town and does not have the big-city feel as in most other Chinese cities. That means it is relatively air and noise pollution free, It is much more like a vacation town, with wonderful restaurants and shops and again quite developed by mainland Chinese standards. Yangshuo has a reputation as a foreigners’ village in Southern China and is a major stop on the trail of many independent travelers. It is also a nice place to stop and explore the local countryside

Yangshuo town is laid out roughly like a ladder. The two main tourist streets run more-or-less parallel up from the river and end at one of the town’s larger streets. There are assorted smaller streets (rungs) crossing between the two larger streets. The street (ladder vertical) on the left seen from the River is West Street (西街 Xijie) and is the older more established tourist street, the real centre of things. The other long tourist street is Diecuilu (畳翠路).

There is a small creek that runs down the centre of the ladder, some of the prettiest bars and restaurants in town are on balconies near it. The street there is called Guiha Lu. It has recently undergone heavy rebuilding and now has many new shops, bars and restaurants. Toward the river end, it curves to intersect Diecielu.

At the foot of the ladder by the river is an open area with a large number of vendors hawking all sorts of tourist stuff, both from shops and from handcarts. There are also a number of rather nice riverside hotels.

Across the top of the ladder is a major street (Pantao Rd) with many hotels. The town’s main bus station is at the corner where that main street meets Die Cui Lu. The intersection has a large open area that becomes very busy at night, with dozens of restaurants and hundreds of diners. Do not expect English menus or non-Chinese dishes.